The two competitors kneel at opposite sides of the ring, a bamboo sword at each person's side. They slowly don their armor. As they stand, two additional plates — called hache hogu (leg armor) in Korean — reveal themselves, hanging down from their belts and covering their thighs. The referee brings them to the center, after which they bow, draw their swords and begin the bout. So far, it looks like a standard kendo or kumdo match, but as they clash, the flavor of the fight changes — with lightning-fast spins, low-level maneuvers and attacks aimed at more than just the head and wrists. While numerous forms of weapons sparring are practiced around the world, none is better-known than kendo. It's the frontman of competitive sword fighting and boasts more practitioners than any other art. However, in the eyes of many, it's badly in need of an update, especially with respect to the variety of techniques permitted. Enter hwa rang domaster Taejoon Lee. Taejoon Lee, president of the World Hwa Rang Do Association and son of the art's founder, Dr. Joo Bang Lee— as well as co-author of the landmark book Hwa Rang Do: Defend, Take Down, Submit— had his work cut out for him. The eighth-degree black sash knew that his art categorized its plethora of weapons according to how they're used in battle — slicing, striking, thrusting, throwing and so on. He also knew that much of that versatility was prohibited by kendo's rule structure.

Taejoon Lee tasked himself with modernizing his art's method of conducting sword fights to make it more appealing to modern practitioners. He wanted a solution that would permit the greatest possible expression of technique with both bladed and impact weapons, thus preserving the Korean art's uniqueness. And he knew that the solution would have to maintain the safety factor for which kendo is renowned.

To give a glimpse into the thought processes that went into the endeavor, he recalls an allegory from his homeland. 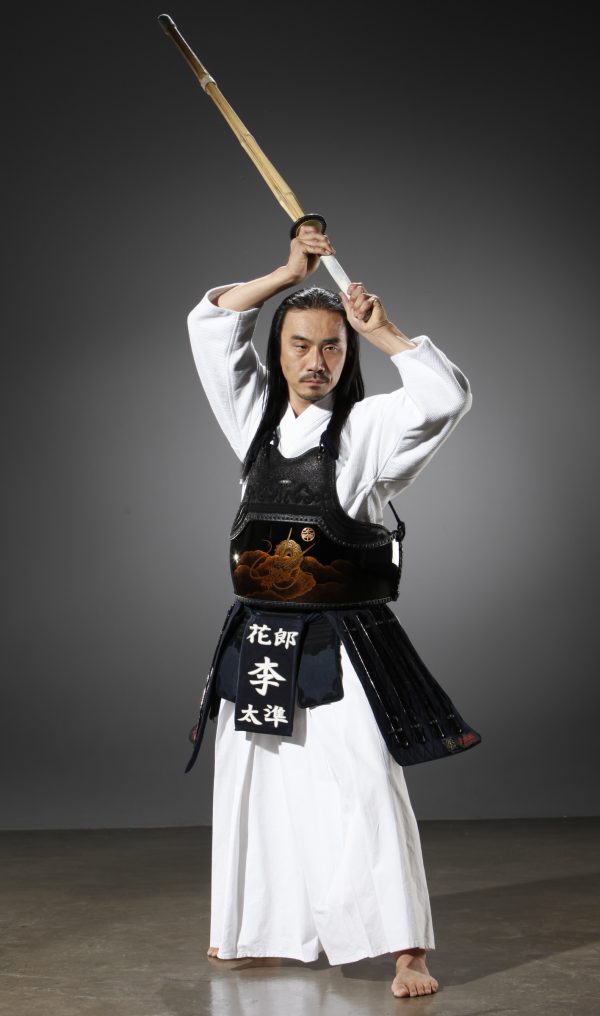 A Tale of Three Nations

“Three martial arts masters — one from China, one from Japan and one from Korea — came up to a massive stone wall," Taejoon says. “The Chinese master walked up to it, touched it, gave it a little push and then, realizing the wall was solid, went to look for a way around. The Japanese master walked up to the wall and stared at it, then took a stance and proceeded to punch it repeatedly. His fists were reduced to bloody stumps, but he eventually broke through. The Korean master looked at the wall, threw his favorite jump-spinning back kick and bounced off. He shrugged his shoulders, then went to search for a way around."

While it may sound like a cultural joke, the sociological implications of the story are spot on. The martial arts of each nation have been influenced not only by the personalities of their masters but also by the geography of the land.

Japan is a collection of islands. When attackers invaded, the locals had precious little room to retreat before ending up in the sea. Thus, it's not surprising that their combat mindset evolved to favor powerful and direct killing techniques. Systems such as kyokushin karate and kendo exemplify this idea with their hard-charging, one-punch-one-kill mentality.

China, on the other hand, is a vast land mass. If an invader came from one direction, retreat was almost always an option. Military strategies took into account the availability of maneuvering room and thus emphasized avoidance. That gave the Chinese the chance to develop martial arts that focused on yielding before delivering a finishing blow.

Situated between China and Japan, both geographically and ideologically, Korea is a peninsular nation. Historically, that afforded Koreans the ability to retreat toward the mainland if attacked from the ocean yet forced them to develop hard-core fight-or-die skills if backed up to the seaboard. Thus, their combative tendencies exhibit both linear and circular approaches.

Back to the Present

While striving to accomplish his task, Taejoon Lee appreciated that kumdo gave his students a chance to develop their linear sword skills in a sparring format, but he thought the standard rules prevented too many of the circular, spinning techniques that have always proved invaluable in combat.

“Hoi-jeon is a central concept in power development for hwa rang do," he explains. “To develop greater power output, you have to accelerate your weapon through a greater distance or place it under a greater torque. So when we spin — whether for a kick, a strike or a cut — we're trying to capitalize on that rotational force to impart the maximum damage to the target. It's not that you can't do that in kendo or kumdo; it's just that nobody really does it. So as soon as we implemented our new leg armor, which is now patent pending, spinning strikes or cuts to the thigh or belly suddenly had a lot more relevance."

To demonstrate his point, Taejoon Lee puts on his armor, picks up his bamboo sword and squares off with a student. They exchange blows and blocks for a few seconds, feeling each other out. As the opponent charges in with what ought to be a decisive head strike, Taejoon Lee blocks, spins and drops to one padded knee. The sound of his sword striking his adversary's leg armor resonates throughout the school. If the training equipment were replaced with live blades and the armor removed, a leg would have gone sailing through the air. 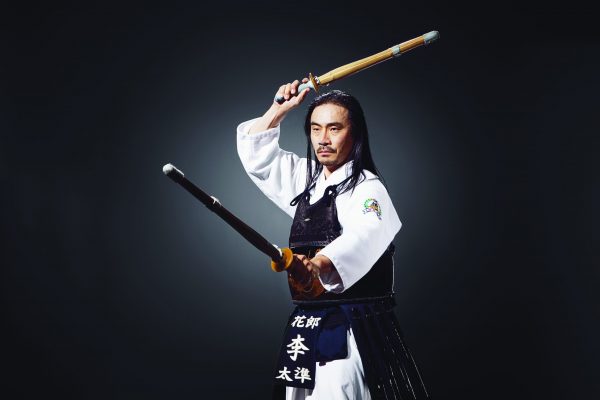 Taejoon Lee then launches into an offensive application of the spin, upping the tempo of his footwork and movements. As the first few strikes are executed, it's obvious he's headhunting, unleashing heavy blows at his opponent, who can barely block in time. After each charge, Taejoon Lee backs off a bit more. Finally, he darts in with speed and ferocity, his weapon held high for a head attack. His opponent lifts his sword in hopes of blocking, but Taejoon Lee is one step ahead. Having drawn the man's weapon upward, Taejoon Lee spins underneath, effecting a beautiful belly strike. "A lot of martial artists say that any spinning technique is turning a blind eye to the opponent — they say that as soon as you turn your back, a straight- line technique will dominate you," Taejoon Lee says. "That's true — up to a point." To illustrate, he spins, and his opponent strikes him easily each time he does so. Point made: Using a blind spin without setting up the technique is a Hail Mary play in combat. Taejoon Lee then shows how the hoi-jeon principle should be used: He deflects his opponent's sword to the side, and by the time the man regains his composure and centerline control, he's already been cut. Mentally and physically, Taejoon Lee breaks his balance, drawing him into a specific reaction and capitalizing on the opening that's created.

With the modifications Taejoon Lee made to the safety gear, weapons training enters a whole new realm. Angles of attack and defense become less predictable — and more exciting to watch. Best of all, the improvement doesn't apply just to bamboo swords.

“When I first implemented sword fighting, we used the standard kumdo format and I referred to it as kumdo," Taejoon Lee says. “But with the new safety armor and the emphasis on wider technique, we now call it gumtoogi (sword combat) or bongtoogi (stick combat)." 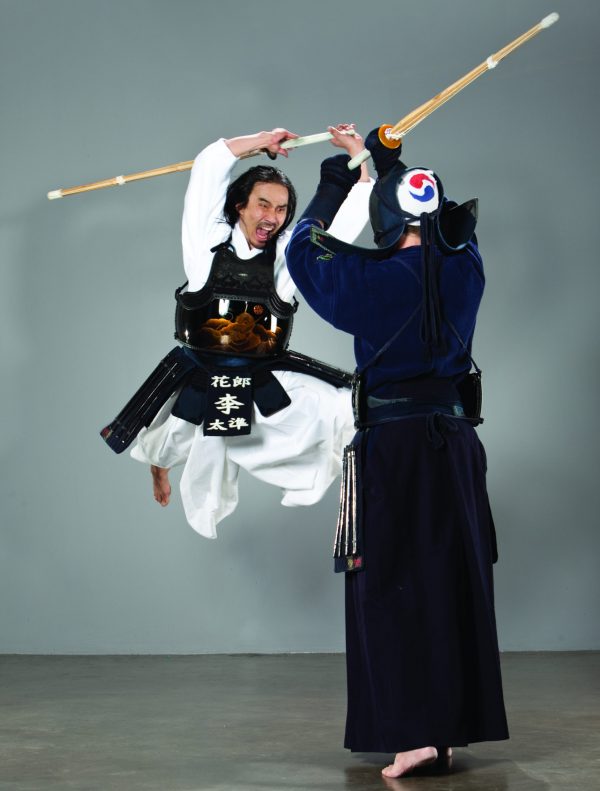 In hwa rang do, impact weapons vie against impact weapons, and bladed weapons vie against bladed weapons because there are major differences in the associated strategies. With a stick or staff, students are allowed to make contact with any part of the shaft. With a sword, however, a cut must use the simulated edge and a thrust must use the tip and target the opponent's throat guard.

“It'd be easy to allow whatever contact to score, but that wouldn't honor the principles of each weapon's strong points," Taejoon Lee says. “Training should honor technique and revolve around principle. Scoring whatever just reinforces sloppy technique and dishonesty."

To that end, the spinning leg attacks effected with a simulated sword must be done with one knee touching the floor, and cuts that target the belly must be delivered from a standing position. Although, in reality, an edged weapon could certainly attack a leg from the standing position or the midsection from the kneeling position, the rule forces students to execute deliberate technique with a greater degree of precision. It also makes each move easier for officials to judge at tournaments, where more points are awarded for high-difficulty techniques such as spins. 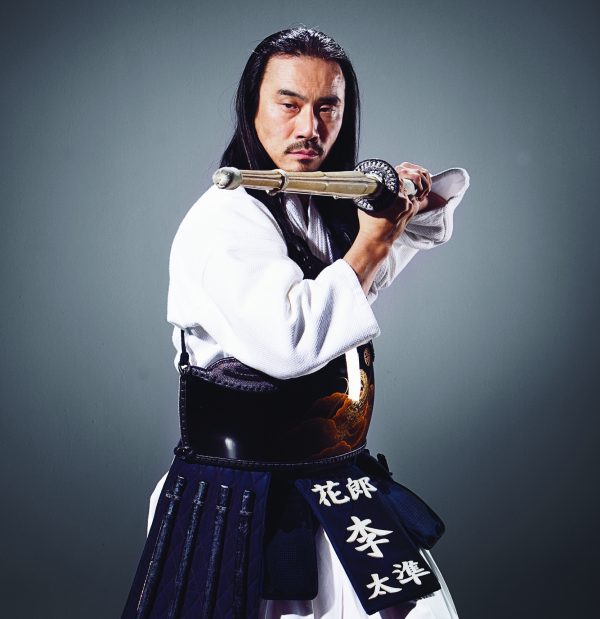 To maximize the propagation of gumtoogi and bongtoogi, the World Hwa Rang Do Association has made the new weapons-sparring format open access. “This is a good program for traditional schools to teach applied weaponry with," Taejoon Lee says. “We took what kendo and kumdo brought to the table, used the majority of the targets and equipment, and modified it to allow for a wider expression of technique using a greater variety of weapons — while maintaining safety and emphasizing clear-cut attacks. For those who practice Korean martial arts weaponry, we've created a sparring format that allows them to express the real flavor of their art and develop the ability to attack at angles they couldn't use before."

As hwa rang do moves forward through its fifth decade, it's especially impressive to see a traditional art whose leadership has such a passion for maintaining and preserving ancient combat skills while applying ingenuity to improve the teaching and training methods. Taejoon Lee's commitment to this makes him one of the martial arts trailblazers of the 21st century.